Introducing an egg fast friendly keto cheese danish with just 1 gram carb. The recipe combines a cloud bread pastry and a sweet cream cheese filling. It’s a treat that even those on a very strict ketogenic diet can enjoy.

When I was working a corporate job, morning meetings often included pastries. I used to enjoy the light and flaky danishes. That’s why I experimented to see how I could make a keto friendly recipe.

I’ve seen a lot of people use mozzarella dough for pastry. But I wanted an egg fast friendly recipe with minimal carbs. So I created a keto cheese danish by modifying a simple keto cloud bread recipe.

You may be wondering about the taste and texture. The low carb pastry is light and fluffy with just the right amount of sweetness. And the cream cheese center adds a nice cheesecake flavor.

When following an egg fast, I always make a batch of cloud bread. The rolls are perfect for making sandwiches while egg fasting.

Because cloud bread is so light and airy, I thought it would make a great low carb cheese danish. With a few tweaks, this keto pastry was born. Not only is it very low in carbs, but it’s egg fast friendly too!

First you’ll make the pastry mixture then top each batter mound with a sweet cream cheese filling. Then they bake in the oven until golden brown.

That’s all there is to it!

Because there no sugar to act as a preservative, storing these keto pastries in the refrigerator is recommended. They should be fine for up to a couple weeks if covered.

They can also be placed in the freezer for up to 3 months. You’ll just want to thaw them in the refrigerator before serving.

Notes on the ingredients

To provide the best texture with minimal carbs, unflavored whey protein powder is used along with a small amount of coconut flour. And a liquid sweetener extract is used to sweeten the pastry.

Since whey protein is a primary component in Soul Bread, I used it instead of coconut or almond flour. This keeps total carbs to only 1.1g for each low carb cloud bread cheese danish.

The only safe sweeteners for me seem to be concentrated stevia and monk fruit extract. I’ve stocked up on those and will be experimenting with them more.

I didn’t have much time to experiment with this recipe. But, I may try just a little coconut flour next time and a bit of baking soda.

The coconut flour and baking soda may give the pastry a better texture. But I tried to keep the recipe as simple as possible as well as egg fast friendly.

Using eggs as the main component rather than low carb flours really cuts back on total carbs. With this cloud bread cheese danish recipe, I can easily eat two danishes and not overdo my total carb count.

If you enjoy having a cup of coffee or tea with something sweet, here’s a few more sweet low carb breakfast ideas: 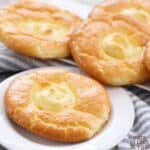 Join my email list and you’ll receive a free meal plan with 20 keto recipes. Plus, you can opt-in for special offers only for subscribers!

Success! Now check your email to confirm your subscription.

Friday Funny (because it’s true!) ♥️ Someone shared this with me on Facebook the other day and I laughed SO HARD…...

This keto sugar free ketchup is made in minutes with just 3 main ingredients plus spices. It’s perfect for burgers, hot dogs, low carb...

Need basic pantry staples without having to order in bulk, or a place to stock up on keto snacks and low carb groceries...

This easy homemade low-carb keto BBQ Sauce brings that wonderful, smoky flavor to your favorite BBQ recipes. But it’s made without the...