Get my 5-Ingredient Keto Cookbook featuring over 120 simple recipes! 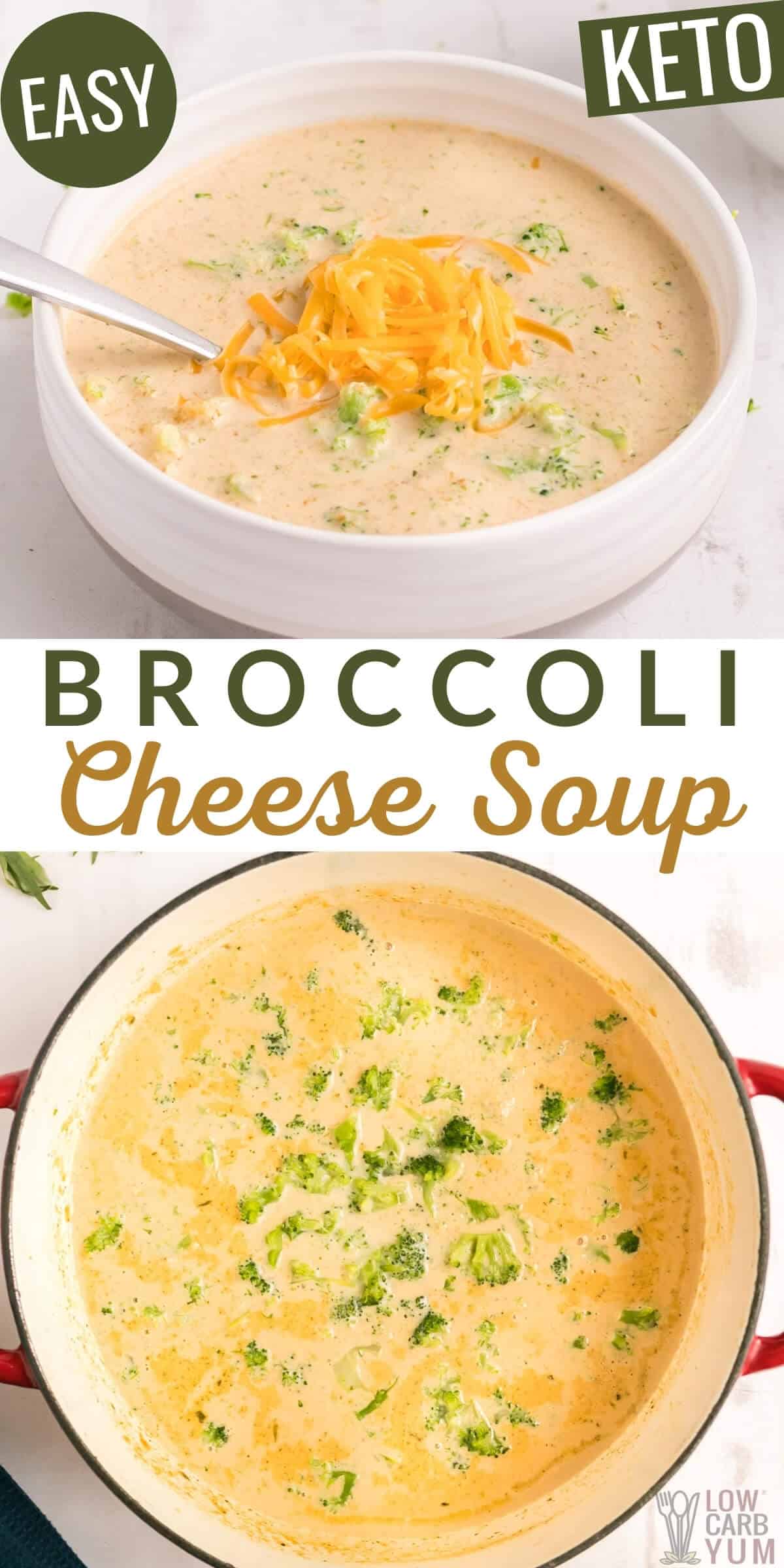 Try this warm and cozy keto broccoli cheese soup if you like the one from Panera Bread. The big difference is that this low carb version made with cheddar has fewer carbs without sacrificing taste.

Now that the cooler fall temperatures have been creeping in, I’ve been craving warm comfort foods. That means it’s the perfect time for soup!

When my daughter decided she wanted to have dinner at Panera Bread the other night, I opted for the soup and salad. I thought it would be a keto friendly choice.

The half chicken cobb salad that I ordered was certainly low in carbs. But, the cheddar broccoli soup I chose was very thick. It likely had more carbs than I would have liked.

So I created a homemade keto broccoli cheese soup to enjoy without worry. Not only is this version lower in carbs, it’s tastier than what I’ve tried in restaurants or from a can.

The soup has a creamy base that blends heavy cream and broth. It’s lightly seasoned with butter, garlic, salt, mustard, and tarragon.

For vegetables, I included a little celery along with the broccoli. Then finished things off with plenty of cheddar cheese.

You’ll find all the amounts used in the recipe card at the end of this post.

How to Make Broccoli Cheddar Soup

Plan to consume the soup within four days if stored in the refrigerator. I like to reheat leftovers in a lunch crock at my desk for a cozy meal at work.

You can freeze it for up to 3 months, but the broccoli won’t be as crisp. Therefore, I like to puree the soup with a stick blender after reheating from frozen.

What goes well with it?

Because it’s such a rich soup, it’s best served with a light salad. But you can also sprinkle in some bacon or ham for a heartier soup.

How many carbs are in broccoli cheese soup?

A cup of Panera Broccoli Cheddar Soup has 17g carbs per cup. That’s why it’s much better to make this keto version which only has about 7g per cup.

What’s the best way to thicken the soup?

You can thicken the soup with xanthan or guar gum. Adding in some puréed cauliflower or more cheese will also make it thicker.

Can the soup be made in an Instant Pot?

Cream can curdle under pressure so it’s not recommended to cook the soup in a pressure cooker. However, you can use the same cooking steps with the Instant Pot on the sauté setting.

How can I make it in a Crock Pot?

You could add the all the ingredients except the cheese into the slow cooker and cook on low for about four hours. The cheese would need to be added at the end and may not melt completely. So you may want to melt the cheese in the microwave before adding.

Other Recipes to Try

Want some more ideas to warm you up on a cool day? Here’s a few popular low-carb soup recipes and stews you may like: 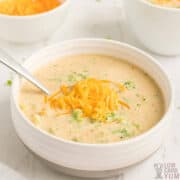 A blend of broccoli and cheddar cheese that’s rich and creamy. It’s a heartwarming soup that is sure to become a favorite in fall and winter.

A stick blender can be used to help incorporate the cheese into the soup. It can also be used to puree some of the vegetables.
Makes about 8 cups of soup.

My Top 5 Secrets to Master Keto!

First Published on January 21, 2011… Last Updated on September 25, 2020, with new photos and an improved recipe with additional tips.

Need some ideas and inspiration? The low carb food diaries are coming back! Yes, finally. 😉 Apologies for the long quiet spell....